What is pelvic inflammatory disease?

PID is most commonly caused by an infection you catch during sex. Chlamydia and gonorrhea are two of the most common infections that lead to PID. PID can cause ongoing (also called “chronic”) pain. It can also leave you unable to have a baby, because PID can cause scars to form on the fallopian tubes.

What are the symptoms of PID?

The main symptom of PID is pain in the lower belly. In some women, this pain gets worse during sex.

Other symptoms can include: 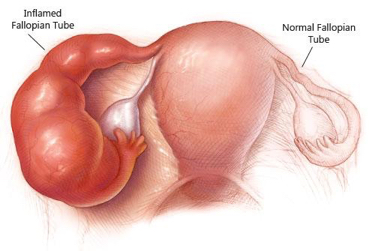 Is there a test for PID?

There is no simple test that can show whether or not you have PID. But there are a few tests that can help find the possible cause of your problem.

Depending on your situation, you might also have other tests, such as an ultrasound. An ultrasound is an imaging test that creates pictures of the inside of your body. It is painless.

Should I see a doctor or nurse?

Yes! If you think you might have PID, it is very important to find out and to start treatment right away. The longer you wait to get treated, the more likely you are to develop long-term problems.

How is PID treated?

PID is treated with antibiotics. These antibiotics come in different forms, and not everyone takes them in the same way. Some people get a shot plus pills. Some people need to get the antibiotics in the hospital through a thin tube that goes into a vein, called an “IV,” first and then take pills when they go home. A  doctor needs to decide which treatment is best for you.

If you have PID, your recent sex partners also need to see a doctor and get treatment. This includes anyone you had sex with in the 2 months before your symptoms started. If your sex partners are not treated, they can infect you again.

Can PID be prevented?

Since PID is most commonly caused by a germ that you get during sex, you can lower your risk of getting PID by:

What if I want to get pregnant?

If you are trying to get pregnant, be sure to tell your doctor or nurse that you have had PID.